Explain the major developments leading up to the rise of the early Islamic empire.

HIS 160 – Middle East Civilization I

In a paper of no more than 5 pages, explain the major developments leading up to the rise of the early Islamic empire. In your argument, be sure to provide reasons for the successful territorial expansion from the last years of the Prophet Muhammad’s life in Medina through the era of Umayyad rule. Your argument should make use of the historical facts, being sure to highlight some of the most significant developments along the way. Your answer should also include a discussion of the continuity and changes in Arabia before and after the advent of Islam.

For this paper, you are not required to do any outside research. You should be able to answer the question utilizing the texts we have read in this class as well as the course lectures and discussions. However, if you do make use of outside sources, be sure to cite them. Unverified websites and Wikipedia are not acceptable sources. As stated in the syllabus, this course has a zero-tolerance policy for plagiarism and academic dishonesty. Anyone found to have engaged in academic dishonesty will be reported to the Honor Council. 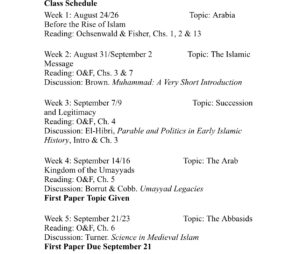